A lot of people seem unhappy with the portrayal of bisexual characters in Glee.

The characters that seem most often discussed are Santana, Brittany and Blaine. Only Brittany is played as bisexual, but Santana certainly has been with both girls and boys and Blaine explores his attraction to Rachel in “Blame it on the Alcohol”.

The powers that be have said that Santana is a lesbian, out to herself, but still struggling with it, especially since she’s in love with Brittany who is dating Artie. Brittany appears to be attracted in more or less equal measure to girls and boys. 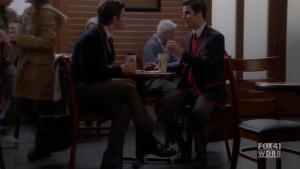 Blaine kissed Rachel during a drunken game of spin the bottle and was surprised by how much he enjoyed it. She asks him out and he accepts, which prompts a heated conversation between himself and openly gay Kurt, who comes out with some biphobic arguments. Fortunately, Blaine manages to counter his arguments well, and the overall sense of the scene — to me, anyway — is that Kurt’s arguments come off as coming from the fear that he won’t be able to compete with Rachel (his usual nemesis) and from his own insecurity. And while Blaine discovers that his attraction was indeed the result of alcohol and not that he has any attraction to women, I’m not convinced the episode was problematic.

Blaine — the character at the centre of the storyline — presents an entirely open attitude. He’s young, he’s not sure, and he doesn’t have any trouble exploring the possibility (even though he clearly finds it confusing). He also stands up to his best friend who is being intolerant, and equates it with the hostility Kurt has experienced for being gay. I’m not sure how much more the show could have done to make it a positive storyline, other than make Blaine bisexual, which would be a bit of a detour from what has been a carefully constructed Kurt and Blaine storyline.

Next up, Brittany and Santana.

3 thoughts on “Bisexuality and Glee: Blaine”