Editors’ Note: ‘High Notes’ are a collection of meta quotes and links that caught our attention in the first few days after a new episode aired. Our selection of them is of course entirely subjective and limited to what we actually read and doesn’t imply that other pieces weren’t equally noteworthy. Please feel free to recommend such things to us after the following episodes (before the next High Notes post goes up), especially longer pieces that haven’t been posted on Tumblr (but no guarantees that we’ll use them).

So, most of the “meta” surrounding this episode consisted of Klaine and Quintana animated GIFs! Here, I’ve tried to find pieces that explore as many of the characters as possible. Please let us know if you’ve come across others—we’d love to know about them!

Wowbright analyzes the verbal and nonverbal communication between Kurt and Blaine, and what it says about their reconciliation so far:

Throughout the episode, we see Blaine let Kurt define and take symbolic control of the relationship: Kurt being on top in the car scene; the “we’re not dating, we’re just here as friends” echo chamber as they walk off the stage; Kurt deciding how close they get when they dance (Kurt’s the first to rest his chin on Blaine’s shoulder, not the other way around); Blaine’s flirty “I know your plans don’t include me” in the hotel hallway; Kurt pulling Blaine by the tie into the hotel room; and Blaine wordlessly accepting (if giddily side-eyeing) “That’s what we are, just friends” in the McKinley hallway.

This power exchange is, where Blaine gives Kurt almost complete control over their relationship is I think, an important part of rebuilding trust after Blaine’s cheating (and subsequent hounding of Kurt). Blaine changed the nature and bounds of their relationship without Kurt’s consent. Kurt lost his sense of participation and power; he lost any sense that he had any real say in  their relationship. (source)

Misqueue takes notice of the difference between Blaine’s hook up with Eli versus with Kurt:

I feel like there’s lots of stuff to note between the staging of the scenes between Blaine’s flashback to Eli, with Blaine on the unmade bed, miserable and rumpled and despairing in the foreground, Eli a blur behind him, and the room all in sepia monochrome striped wallpaper, lamp, painting on the wall… to the hotel room in this episode with Blaine on the unmade bed, rumpled and happy and hopeful behind Kurt with colourful striped wallpaper, painting, lamp and color with Kurt focused in the foreground, getting dressed with his little moment of absurd denial. It’s two bookends, visually, thematically: the moment it [faith, his heart, his relationship with Kurt] broke to the moment it repaired. (source)

Sothinky examines “Getting Married Today,” and the episode’s exploration (through all the couples) of “fidelity forever”:

Sue’s function seems to be one of exposing the illusion: the illusion of a wedding as Forever, the illusion of the perfect anything. And just maybe, she exposes the emptiness of tradition. She performs and mocks the role of bride, with Becky leading the way, angrily throwing flowers at the attendees. She continues the role at the reception, where she does the “nonsensical” bouquet toss “in the mythical belief that whoever catches [it] will magically become the next person to get married—or more than likely, to sprint from the alter.” Of course Rachel, who’s not really single, and who was the last person to play the role of bride, catches the thing. 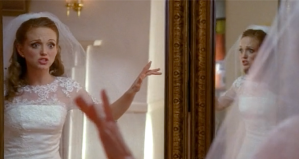 The real bride is worried about a different kind of transformation from the one Sue describes. “The last time I did this I turned into somebody I didn’t even recognize,” says Emma, just before the wedding is supposed to even begin. Sue, by contrast, remains Sue. She’s slouching in her chair, eating and drinking, while Emma seems caged in her dress—she’s suffocating, and she keeps checking the mirror (which at times displays multiple Emmas), as if checking to see that she’s still there.

Axe and Buckeyegrrl: Tina as the Mistress of Manipulation

Axe and Buckeyegrrl dialogue regarding Tina moments through the seasons that account for her behavior toward Blaine:

But, notice this pattern— She’s “helping others” with her manipulation (Artie to walk, Mike to be a dancer, Rachel to break free of McKinley and get to NY), but Tina is also getting something out of it as well. And this season, Tina is being shown to be less and less content with sitting in the background and being “support crew.” She’s not willing to wait around for others to give her what she wants, she’s being more proactive in making it happen herself— downright aggressive even. (source)

This week’s High Notes were selected and compiled by SoThinky.