First, I wanted to welcome everyone back! It feels like it’s been a long hiatus. Longer, in fact, for me, because I was unable to participate for so long before Season 4 even ended. For those of you who don’t know, I’m tracking about a month behind Heather Morris in baby-timing, and because of “morning” sickness and other complications I was pretty much unable to communicate or look at a computer for months on end.

I am lucky to be in such a fandom that people were able to jump in and keep Deconstructing Glee afloat when I had no choice but to cut it loose. I’m in the home stretch now, and finished work for a while, so hopefully, I’ll be around an awful lot more. I just hope there’s still a place for me. 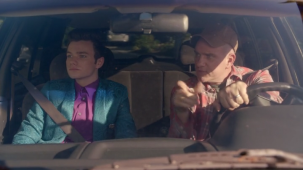 I have missed being a part of fandom, and as far as I’m concerned, Season 5 couldn’t have started any better. Which is good, I guess, because we know it’s going to get an awful lot more painful very quickly.

I found myself immediately drawn to how very spring everything is in Glee land. This is the first time, of course, we’ve seen McKinley in a completely different season than the real world and that’s fascinating. To remind us of this, the people at Glee set about creating spring before our eyes, not with baby animals and new grass, but with the wardrobe. I found myself thinking that just as Sue was misquoting Jesus, “the ends justify the means.” And depending on your theology, your Jesus may or may not believe this, especially regarding judas, who may or may not also be Sue Sylvester.

Jesus’ end is Good Friday, Lent, and ultimately Easter. We find Blaine and Kurt resurrecting their life together in the courtyard. Blaine is dressed like a white lily while Kurt is dressed (as the high priest he always seems to be) in liturgical green and purple. It’s Easter in the hearts of many at McKinley, and Passover too, with the earthy colours of the traditional seder plate.

I’m a little sick of girls who want to date Artie but don’t want to be seen dating Artie. And it’s never because of his misogynistic tendencies because that would be a good reason. 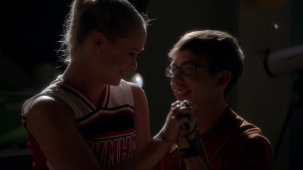 Was it just me, or was it hard for everyone to watch Burt’s conversation with Kurt, in light of the Rachel and Finn marriage storyline? Because, you know, Rachel and Finn got even less time than Burt and Kurt’s mom. Obviously, in-universe, we don’t know that yet, but that whole scene stung for me, but ultimately heightened the actual proposal scene that followed.

I’m not sure what to do with the Tina story. I mean, I get that she was standing up for Artie, but why does she have to be so obnoxious about it? And why does she seek some

kind of meaningless approval from Will before she does it? She’s very lucky to have the friends she has because right now, wow, it’d be hard to love her.

As usual, underwhelmed by Rachel’s attempts to prove her

star quality. She seems to prove it when she doesn’t need to and she falls flat when she needs to. I couldn’t tell if the impression in-universe was the same. There was a moment where I wondered if the producer/director guy was actually looking more at Santana than at Rachel, because that would be a fun twist.

So what did you think of Love, Love, Love? Are Kurt and Blaine solid now? Does this path of true love run smooth forevermore? Has Rachel made a real impression? Is Will actually a prop? Can NYADA teach Kurt to dance? Will fandom ever believe that Blaine is not white now? When will someone make a Klaine fanvid to “I’ve Loved You Before”?