Class Discussion: 5×02 “Tina in the Sky with Diamonds” 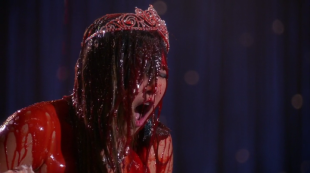 I don’t have a lot of strong feelings about this episode. I feel like it was a whole bunch of bits and pieces — and once again, I’m having a hard time ignoring what I know is coming.

Tina was getting desperate. The interruption was hilarious, because haven’t we all wondered if glee club ever ends during a performance? I am glad, at the end, that they cleaned her wounds, and helped her back up on her feet, because if that hadn’t happened, I shudder to think where Tina may have gone from there. But this probably isn’t the end of Tina’s struggles. 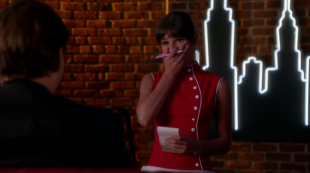 Ok, so were you part of the half of the English speaking world that giggled like 8 year olds on helium when Rachel shouted out “I’ve got fanny!”? Because I sure was.

I really liked Kurt working at the diner too. It’ll be nice having the three of them together at work instead of at separate places. And Dani. The jury’s still out, but at least they do seem to have some actual chemistry. I really do not want to upset the crew of the good ship Brittana, but man, I want something hotter. The biphobia rings true. I wonder though, about why Dani was winding Santana up.

Santana’s yeast infection ad is the funniest thing I have ever seen. I mean, really, they should make ads like that.

The “cake” request was cliche and awesome. I did not expect Rachel to get the part. It will be excruciating to see what happens from here on out.

I’m not sure I get where the Penny/Sam thing is going. Any thoughts? And have they dropped Ryder and Unique as a plot?

3 thoughts on “Class Discussion: 5×02 “Tina in the Sky with Diamonds””