Editors’ Note: episode reactions at Deconstructing Glee come from a rotating panel of contributors from all around the globe. Seriously, let us know if you’d like to be part of our Secret Society of Superheroes, here! We could use more contributors as we move toward the final episodes of the season. This week’s post is written by Sothinky.

In “Guilty Pleasures,” apparently Lord Tubbington, R.L. Stine (who does not watch Glee) and a little android girl hold keys to much of the episode. 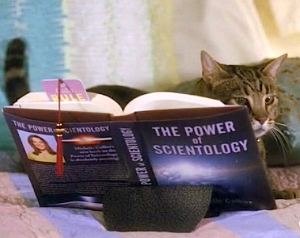 Clearly, cats rule (and that author photo sure reminds me of old Rachel pictures). Turns out Lord Tubbington’s guilty pleasure is scientology. I’m not an expert on it, but here’s a fun fact:

Scientology teaches that people are immortal beings who have forgotten their true nature. Its method of spiritual rehabilitation is a type of counselling known as auditing, in which practitioners aim to consciously re-experience painful or traumatic events in their past in order to free themselves of their limiting effects. [source]

So, we get musical “auditing” throughout the episode, as various New Directions members subject each other to performances by artists that they’re ashamed to be into. Even Kurt’s acting teacher is in on Blaine and Sam’s assignment, as he tells his NYADA students, “By acting out our secret shames, like Carly’s traumatic sense memory, potty training, we can be more vulnerable as actors.”

Characters use some interesting language that relates to all this scientologic auditing. Blaine tells Sam he’s going to be “stuck in this shame spiral forever” if he doesn’t admit his secret (which turns out to be a love for Barry Manilow). Rachel finally admits to Brody that she dated him in response to what happened with Finn. Brittany and Tina seem to be trying to push Kitty to do some auditing too, and Artie (among others) notices a change in her as a result.

And for those of you still trying to understand Blaine’s signing “Against All Odds” to Sam, the idea of “consciously re-experiencing painful or traumatic events in [one’s] past in order to free [oneself] of their limiting effects” does a lot to explain why this song is 1) performed live and 2) set up in many ways as a parallel to the Callbacks’ version of “Teenage Dream.”

And Kurt? I’m torn on whether he’s doing the same—he has the most guilty pleasures, and they’re all hilarious and perfect. But whereas many of the other characters more or less free themselves (or begin to) from whatever is holding them back, I wonder about Kurt, who seems very happy even as he says he “love[s] being held in Bruce’s warm, loving, nonjudgmental embrace.”

Even if R.L. Stine knows nothing about Glee, the reference to Phantom of the Auditorium is a clever means of pointing to those characters whose presence looms, like Finn’s in Rachel’s story, or Kurt’s in Blaine’s.

But that masked phantom (or at least the idea of masks) is referenced elsewhere too. Brittany tells Kitty that she’s inviting her to take off her “Joker mask,” and Blaine, encouraging Sam to reveal a secret, tells him, “Once you stop hiding, you’ll feel so much better.” Fun fact: the book is about two kids, a boy and a girl, who get cast in a play. The book unfolds pretty much like Phantom of the Opera, but the guy living below the theatre is actually a homeless man. 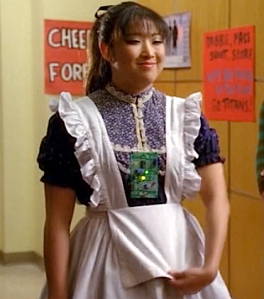 Finally, we have Vicki from Small Wonder, and thanks to her, another reference to plastic people. Tina says, “I am an android. I’m fantastic, made of plastic.” So what, exactly, does re-enacting this guilty pleasure release Tina from, going back to the idea of auditing? In her Vicki voice Tina goes on to say, “Small Wonder has made me the woman I am today, free to speak my mind and think outside the box.” I want so very much to find a way to tie this to what she likely has felt shame for: the Vaporub incident brought up explicitly by Sam. If Tina’s a robot, is she not fully owning up, emotionally, to what she did? (“It was a phase,” she says, simply, as if that covers it.) Or how else are we to interpret this moment, and the one that happens next, as she tells Kitty she’s going to literally follow her around?

There’s plenty more to talk about here—and I’m purposely trying to present some things I haven’t yet seen (or build on what I have). Please feel free to chime in with any of your reactions to “Guilty Pleasures.”