Editors’ Note: episode reactions at Deconstructing Glee come from a rotating panel of contributors from all around the globe. Let us know if you’d like to be part of our Secret Society of Superheroes, here.

Glee is a show that loves its pop culture references, but “Girls (and Boys) on Film” has so many shout outs it will  take more than one watch to catch them all. 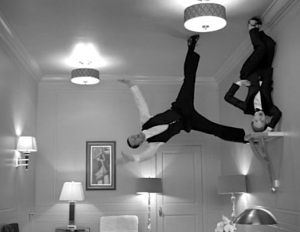 Will’s love of old movies inspires a dream where Emma didn’t flee (He refers to Dream Emma as “Emma Schuester”). The couple channels Fred Astaire to recreate a scene from Royal Wedding where they dance up the walls and on the ceiling. Will is panicked by this, and wakes from the dream shouting about being up-side-down. Will’s world is currently topsy-turvey, and while both of them being dressed in tuxedos is a part of the movie moment it’s worth noting that someone wanted to get married in the last episode, and it wasn’t anyone in a wedding dress. The color also drains from the screen during the song leaving us in black and white. What does this mean for Emma whose wardrobe is usually bursting with color?

Despite the competition between the boys and girls Blaine brings the club together for a performance of “Shout.” The number travels through the school picking up students as it moves. This isn’t the first time the student body has joined a glee club number, but is there a different vibe in the air? Even with the mention of Animal House the song doesn’t finish with a food fight. This is not the same reaction the club received just a season ago in “The Purple Piano Project.” 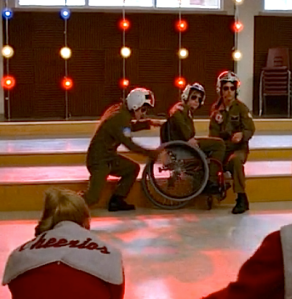 The boys go the traditional route with a mash-up song and two “hyper masculine” movies Risky Business and Top Gun. What did you think of the use of Artie’s chair in regards to the choreography? It was used more like a prop than I think we’ve seen before with the play of spinning the wheel almost like revving a car engine.

The girls don’t mash-up songs, they only use “Diamonds Are A Girl’s Best Friend,” but they’ve got a pop culture mash-up worth paying attention to. The song used comes from the movie Moulin Rouge which involves a quick line from Madonna’s song “Material Girl.” The girl’s dresses are exactly what you see Madonna wearing in her “Material Girl” music video, which is in turn a tribute to Marilyn Monroe in Gentlemen Prefer Blondes who is singing “Diamonds Are A Girl’s Best Friend.” They never outright say it, but they’re also the hyper-feminine counterpoint to the boy’s number.

Meanwhile, the New York crew is actually watching Moulin Rouge, a love story between a writer and a prostitute. Last episode, a lot of us speculated that Brody might be involved in sex work, and this episode has Santana theorizing drug dealer. Usually, movies have women playing sex workers and men playing drug dealers. Considering that both Moulin Rouge and Risky Business are movies that feature prostitution what side are you leaning toward? 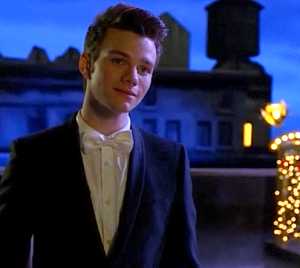 Kurt also gets a romantic dream sequence, but he’s quickly woken from it. First by Santana, who talks (loudly and in public) about his still very real feelings for Blaine, and later from Adam. Adam asks Kurt to end the fantasy about Blaine, so that he can make a new love story with the flesh and blood boy in front of him. Is Adam’s Kurt’s rebound or does he have a real shot? What does it say that T.V. references only are used in this episode in relation to Adam while the rest of the characters get movies?

Santana is one of the few characters that hasn’t cast herself in a fantasy film. Brody’s famous makeover line is reused on Santana, but she questions it rather than taking it as gospel. She doesn’t talk about New York as though it’s Heaven either, and she’s got a running list of its flaws even while admitting that she likes the city. Is Santana’s ability to see things as they really are a sign of her maturity? Is she playing the game better than Kurt and Rachel? 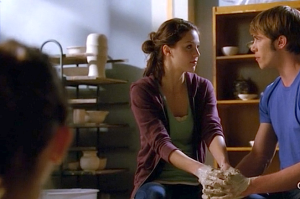 And speaking of casting ourselves in movies. When Marley and Jake recreate Ghost we cut to Marley sitting on the ground watching the scene as though she were watching a movie of her life. She can’t decide whom to cast as her love interest, and we see both Jake and Ryder auditioning for the part. Marley also brings up The Hunger Games and we could write this off as just a reference to another love triangle, but is that the case? The Hunger Games is not primarily a love story, but also one about a young woman surviving impossible tasks while feeling powerless. Would the show have just used Twilight if they wanted us to only focus on romance?

Thoughts? Ideas? Movie moments I missed? What did you think of Artie and Finn looking like long lost Weasley children?

This week’s post written by Poemsingreenink, Secret Society of Superheroes
Age: 29
Location: USA
Primary Glee interests: I like the whole show, but I pay extra attention to the GLBTQ characters.
What else: Be excellent to each other.
Also lives here: poemsingreenink.tumblr.com