Editors’ Note: episode reactions at Deconstructing Glee will now be coming from a rotating panel of contributors from all around the globe. Let us know if you’d like to help, here.

The obvious theme of this week’s episode Naked was physical and emotional nakedness and all the issues that come with that. Sam and Artie had to come to terms with their body issues over the topless “Men of McKinley Calendar” photos. Rachel had to make up her mind about playing a topless role in a student film. Marley and Jake had to confess their love to each other. Sam had to face his feelings of inferiority over his bad SAT score and how he believed his body is all that he has to make an impact. Many people called the things that happened (or didn’t happen) “pornography,” with various degrees of accuracy. There was also a lot of pushing others or oneself into things people may not be ready for, but also a lot of support for defining one’s own boundaries and sticking to them. 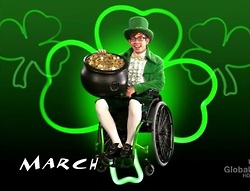 The calendar was the biggest storyline for the Lima guys. For me, the most interesting part of it was Artie’s story because at first it seemed to reinforce the idea that a disabled body is an unattractive body that shouldn’t be on display in an eroticized context. But then I realized that it was more complicated than that. First of all, Artie is probably realistic about what his Lima audience would think of him and their perception of his body as “broken.” Then there are Becky and Brittany who both clearly think he’s hot, and Sam also knows he has massive biceps (as he would as a user of a non-electric wheelchair!). I also found the conversation Artie had with Finn really interesting, both in how Finn wanted to solve the problem of Artie’s wheelchair (by taking it out of the picture altogether and putting Artie on “a bed with lots of sexy pillows,” which also would have removed Artie’s agency to some degree), and how Artie reacted to that (by refusing to be “emasculated” that way). So in the end, Artie gets to participate in a way that’s comfortable for him and that doesn’t take his agency, clothes, or wheelchair away.

The two dominating color themes this week are black/white and red/blue. We know from Glee color theory that red signals power and blue signals the absence of power. This is most obvious when Sam wears blue and Brittany wears red when the two are in Figgins’ office to hear about their grades (and then Sam wears red during his “Modern Centerfold: Techniques for Today’s Hot Young Posers” seminar, and blue again when he talks to Artie about the calendar) and when Artie is the only one in blue during Sam’s workshop (but wears red when he talks to Finn about not wanting to be in the calendar, and blue again when he talks to Sam about keeping his clothes one). Other people with significant red and/or blue clothes besides Sam and Artie: Rachel and Sue. The black and white theme is most obvious in Rachel’s confrontation with her younger self in “Torn” and in the New Directions song “This Is The New Year.” At first I was wondering why everyone was wearing black and white in the final song when the entire episode was about things not being so black or white after all. But then I thought, maybe the point was to show that everybody has contradictions within them: good and bad aspects, vulnerabilities and strengths, and the combination of them is what makes things interesting and people into individuals. What do you think?

There also were a lot of recordings that played an important role: Hunter’s court exit, co-anchor Andrea Carmichael’s meltdown, Brittany’s web TV show Fondue for Two where she outs both Marley’s bulimia and her feelings for Jake, Finn’s record of Sue’s confession about her own porno shoot, the student film Rachel is participating in, the videotaped praise for Sam, and Santana’s internet record for her and Brittany’s sextape from Saturday Night Glee-ver (3×16).It seems that being on record usually isn’t a good thing on Glee because someone will try to use it against you. Remember these examples from previous episodes: Several student-made videos (“Vogue,” “Run, Joey, Run”), the self-made videos of Sue Sylvester’s “Physical” and Rachel Berry’s MySpace songs, Santana’s recording of Sebastian’s confession about the rock salt slushie, Sue’s blackmail pictures of her and Figgins, previous Fondue for Two episodes that outed Santana, Jacob Ben Israel’s blog, the Muckraker magazine, Cassandra’s outburst on YouTube, Figgins’ stockings commercial, and more. On that background, it’s probably good that Rachel decided not to go through with her topless scene (even if she admittedly messed up Electra’s thesis film in the process). So, what is Glee telling us with all these stories about recordings, being on record, and not being able to escape the things one did in the past?

Speaking of Electra, that is a very interesting name indeed. Psychoanalytical theory knows a so-called Electra complex (named after the figure from Greek mythology, whose mother kills the seer Cassandra(!)) that is considered a stage for a girl to go through on the way to developing a mature sexuality. More precisely, she competes with her mother (Electra looks like an older Quinn?!) for possession of her father (Rachel has two gay dads – is that why she’s been so fixated on Kurt as a significant other recently?) and typically experiences “penis envy” (Rachel addresses herself as a man in “Torn”!). So the central question is, was Rachel successful in her development of a mature sexuality? Does her decision to not do the topless scene make her more or less mature? And how does her story relate to that of Artie, who also decided he wasn’t ready to be topless on camera at this time, and to that of Sam, who decided to keep his shirt on despite his belief that his body was his biggest asset? Was Glee actually telling us that not being naked can be more empowering than being naked?

And speaking of Rachel, there were a lot of references to her past and how she forgot who she was, especially in relation to the film but also to her relationship with Brody. She accepts the role of a character with Alzheimer’s, Kurt comments on the contrast between her former and current selves, she sings a duet with her former self, the film has dream sequences and Electra gives her direction prompts like “you’ve been here before but nothing looks familiar” and “perhaps a life lived long ago.” We could even say that Quinn and Santana ask her to remember her current self from her future self (during the 2-2-2 exercise). Rachel has obviously left her former self behind, but she hasn’t quite arrived in the new self she apparently wants to be, and maybe that dream self also has some problematic aspects to it (that are pointed out to her harshly by people like Kurt or Cassandra, even if she doesn’t listen to them). What do you think about her development in this episode? And what are the interests of the people who give her advice, both the voices from her past (Kurt, Quinn, Santana) and the new voices (Brody, Cassandra, perhaps Electra)?

Then there was the theme of emotional vulnerability and honesty that touched on a lot of these stories. Jake and Marley confessed their love to each other, but where, really, was the high risk in that (or is it only obvious to us viewers that those two have basically been in love with each other ever since “Crazy/Crazy For You”?)? Rachel had to admit to herself (and Electra and her crew) that she wasn’t the kind of woman (yet?) she thought she was, and I’m curious to see whether that will help her set better boundaries around Brody in the future. Sam admitted his feelings of insecurity and inferiority about everything that wasn’t his body, and Blaine was able to return the favor of showing him that he was one of the good guys, and a successful one at that. All in all, this aspect could have been stronger, especially the Jarley bits that didn’t seem much related to the rest of the episode. What do you think?

And finally, we need to talk about the meaning of “pornography” (and/or “sluttiness”) and how people (Sue, Kurt, old Rachel) used that term in their attempts to regulate what others were doing with their bodies. Interestingly, the only unambiguously pornographic image in the entire episode was Sue Sylvester’s Penthouse centerfold Regal American Not-So-Bald Spread Eagle shot (which nobody got to see because – as unlikely as that seems – she apparently managed to actually control the distribution of this image). And maybe we also need to talk about consent, and how – for once – everybody eventually was able to define their own boundaries and have them respected. And that includes the consent to be perfectly fine with posing for sexy pictures and sell them to teenage girls who — as Kitty knows — are a financial (and cultural) force to be reckoned with. And if that’s not a nod towards the power fandom, then I don’t know what is.

What are your thoughts about these themes? What other issues stood out for you in this episode? Did you observe anything interesting about the set design or costumes? We’d love to hear from you in the comments!