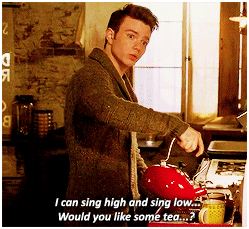 Editors’ Note: ‘High Notes’ are a collection of meta quotes and links that caught our attention in the first few days after a new episode aired. Our selection of them is of course entirely subjective and limited to what we actually read and doesn’t imply that other pieces weren’t equally noteworthy. Please feel free to recommend such things to us after the following episodes (before the next High Notes post goes up), especially longer pieces that haven’t been posted on Tumblr (but no guarantees that we’ll use them).

Callie writes about the empowerment theme of the Sadie Hawkins episode and teases out the difference between being empowered, being in control, and being in charge. She also talks about how people (especially Tina, Rachel, Blaine, and Kurt) get these things mixed up and how gender is relevant in all of this.

When Glee keeps repeating a word like ‘empowerment’ over and over throughout the script, it’s a good idea to take a look at it side-on, because it’s never saying what you think it is. Oh, the idea will be there all right – but it’s just never as straightforward as it seems.

Empowerment, after all, is not necessarily the same thing as being in control of things, even though the idea of the Sadie Hawkins dance (itself rooted in outdated rules of gendered behaviour and expectations, which link to the toxic culture of masculinity* still in place at McKinley High – just in case you were wondering why ‘Tell Him’ was in the episode) suggests that it is. And how much can you shake up the status quo, as Beiste says Sadie Hawkins does, when all you’re doing is flipping the rules over for a week and nothing in the underlying culture really changes? Because the ‘rule’ that boys are in charge at McKinley doesn’t really go away even for Sadie Hawkins.

The system is stacked against the girls, and the boys who don’t fit, so they have to fight harder to win, but when they do, they win more. It’s the people who fit in who ultimately lose this battle, even when it doesn’t look like it to them at all. (source)

Several Tumblr people talk about the universality of asses and the astrological associations of Uranus.

Sadie Hawkins is about flipping gender roles around, right, and this episode was very much about gender fuckery (peacocks!), and asses are a feature that is definitely sexual (as opposed to nice eyes/hair/face/etc.) but also belongs to both genders. (source)

Uranus in astrology represents rebellion and individuality, intuition and eccentric genius, as well as progressiveness and enlightenment.

Given Sam’s positioning as an Ally(TM), his narratives involving his dyslexia and Brittany, and the emphasis since his introduction on his general geekiness, I think that of course Sam would sit under Uranus. (source)

Teabee1968 wonders if Adam’s role actually is to empower Kurt to break free from Rachel instead of Blaine.

Adam counters all of Rachel’s arguments against joining the Apples. He makes it enticing, he encourages Kurt – he doesn’t demand or push. He appeals to Kurt’s ego instead of blanketing it.

If Adam were entirely about Blaine, which I don’t feel he is, he wouldn’t be in a position of power or influence. He’d be a cute fellow student. He’d be the neighbor. No. Adam is offering a performance path to KURT that Rachel Berry does not approve of and one she would not take. (source)

CanuckJacq: (Tina as a “Nice Guy”)

Jacq read Tina‘s demand for an apology from Blaine as her being portrayed as a gender-flipped “Nice Guy.”

They’re totally setting Tina up as a “nice guy”. Entitled, not actually respectful of the other person’s right to not be attracted to them. And it’s interesting to see if it’s more noticed in a girl than it is when it’s a guy. (source)

Despite the fact that Unique didn’t have a single line outside of the songs she performed together with other ND members, Countess7 has found that the episode still tells us important things about her.

it’s clear that she’s obeying her parents and conforming during school hours, because she’s dressed as wade in the locker room scene when tina sings.  also, even though unique wore a dress for the magical performance of tell me, when marley notices that brittany’s magic has ended, she’s back in wade’s clothes. this is SUPER interesting to me. because who can see brittany’s magic and who can’t? (source)

SoThinky/Mockanddee/IMakeGoodLifeChoices: (Collective meta about Blaine and Tina, his grand gestures, and how they come across differently from the way he meant them)

Several Tumblr people talk about Blaine’s grand, romantic gestures and how he seems oblivious to the fact that anyone could read them as anything but play. Cue Tina/Blaine misunderstandings.

One thing I noticed in his interactions with Tina, is how he is so … charming. He says these GRAND THINGS. Like after Tina says, is there anything you can’t do? He has this perfect response that involves sweeping her off to a slow dance. He says where have you been all my life? Things that are so romantic … that you could imagine him saying to Kurt.

I think in this situation, he has good reason to believe that Tina is on the same page as him — in the hallway scene, she says she knows that he can’t love her back and they have that discussion about Blaine’s crush on Sam and missing Kurt — and so thinks are both playing with this in a way that’s safe and relatively harmless. Tina interprets it very differently and I don’t blame her at all, because I think she wants to believe and maybe even believes she can make it so.

Blaine has always been excellent at playing a role. He sees what’s expected of him and does his best to impress. I don’t think he even realizes he’s doing it. He’s just making everyone happy. (source)

SoThinky talks about Blaine’s growth since Makeover (4×03) and through Sadie Hawkins (4×11), and also mentions Brittany’s role in the Blaine/Sam relationship and touches on some of the dance imagery, including snowflakes, white horses and frozen rivers.

I like all the evidence we got in the episode regarding how Blaine has found a comfortable place for himself—as himself.

How much Blaine’s friendship with Sam means to him—you can see it in the way he runs off with Sam at the dance, even though he pretends to be just humoring Sam’s conspiracy theories earlier in the episode. It’s important that Blaine is seen poking fun at Sam and goofing around in the cafeteria. Sam brings that side out of Blaine, and I can’t help but remember how Brittany instigated this friendship in “Makeover,” by essentially reintroducing Sam to Blaine. Did she know what Blaine needed? That Sam could provide it? She is, after all, the Human Brain. (source)

TeileDesGanzen: Glee: Warblers on ‘roids, Or: “In Just Seven Days, I Can Make You A Man”?

In other words, Trent reports a medicalized secret cult of masculinity with major homosexual undertones, run by Hunter “Not Even Remotely Bisexual” Clarington. Well, as fandom speculated before, Hunter probably gets his biggest kicks out of being in control and making everyone else do what he wants them to, so gender may indeed be irrelevant to him. Nevertheless, Dalton is an all-male world, and the Warblers use a substance heavily associated with masculinity to get an advantage, and Glee portrays this in images that allude to male sexuality, so it’s difficult to ignore the homosexual associations here. Even if Sebastian is strangely absent from the scenes.

In fact, the Warblers have made themselves into extra-masculine men, or, if you will, literal super-men. And it’s “round-faced Warbler” Trent, the “sunshine of the group,” whose “hormones can’t handle heroic(!) doses of testosterone,” who doesn’t “even shave yet,” and who is called “Sensitive” by Hunter when it’s his turn to take it into the butt — in other words, boyish, child-like, and implicitly asexual Trent –, who ends up blowing the whistle in a way Hunter definitely didn’t mean him to. (source)

JudeAraya: (Meta on Rachel and Kurt in NYC)

Jude compares Rachel’s and Kurt’s wardrobe changes this season and relates them to the changes the two made (or didn’t make) when it comes to life in NYC compared to life in Lima, Ohio.

For all that I see Rachel’s changes as being external (and wow how does this play into her relationship with Brody, man I could talk about that for a while), I see so much internal growth in Kurt. Even his wardrobe seems to track these changes. I realize this seems like a statement that supports a sort of make over like Rachel’s, only it *doesn’t*.

He didn’t go through a showy external makeover. The subtle changes in his wardrobe reflect the slow movement internally that he’s made from a boy who projected so many things (confidence, a strong “fuck you” to those around him, safety). He’s dressed down so often in this season, even if it’s in more private moments. But we as viewers are getting to see him like this. Less layered, less put together. (source)

Multicorn: i love your everything, 4×11

Multicorn writes about how so many people on Glee actually happen to like each other, whether they have a crush on the other one or not and what a gorgeous thing this kind of friendship is. There’s also a great comparison of “Baby Got Back” vs. “Teenage Dream” where the former doesn’t end up being a lesser version of the latter. And finally a contrasting look at Rachel/Brody and some observations about Kurt’s approach to NYADA.

This episode can claim to be about empowerment all it wants, but what I see is mostly the things you can have when power gets out of the way.  Which is: liking people.  Sometimes it’s part of a crush and sometimes it isn’t, but either way, liking people is AWESOME.

“Teenage Dream” was both romance (no regrets, just love) and sex (put your hands on me in my skintight jeans); “Baby Got Back” is just sex, and shallow, but it’s still positive.  It’s about appreciating someone, and saying they’re attractive even if mainstream standards might say that they’re not.  Contrast it to something like “Whistle,” which is demanding and in the Warblers’ performance almost frightening; “Baby Got Back” is just silly, playful, and hey, just so you know?  You’re hot.

And everything about Kurt’s being at NYADA fascinates me – it’s the same thing he was doing at vogue.com in 4×03, and in Cassie’s dance studio in 4×06, he’s looking around and hungry to learn everything he can, and I just. (source)

Mockanddee: I like all the new information about NYADA

Mockanddee draws some conclusions about NYADA from what we have seen and heard of it in the episode.

I like all the new information about NYADA. It clearly has more majors than I originally thought — if it has stage combat and classical acting, we can assume other majors related to acting craft. There’s ballet, so it probably has other dance as well and at least a general technical theater major if not more specific ones (Rachel’s comments at the loft about “stage managers and carpenters”). I think I saw people carrying musical instruments in one of the shots, so maybe some type of music program as well. (source)

This week’s High Notes were selected and compiled by TeileDesGanzen (image source).