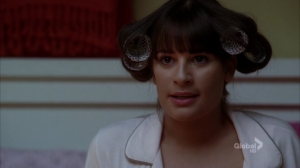 Choke was an enjoyable, if all over the place, hour where Glee explodes any concept you might have of “safe” being an actual real thing.

Like the episode, I’m sort of just going to ramble all over the place.

I guess I’d argue that Rachel’s and Kurt’s auditions were the primary plot here, but it’s hard to frame a domestic abuse plotline as a background thing without feeling like something is wrong. But still, the show began and ended and focused on the auditions. It was a good story, with little to discuss, other than how disappointed the Tumblr fangirls/boys will be when they learn how flattering dance belts can be. I was disappointed they put so little effort into

Music of the Night — it was an awful performance, and it shouldn’t have been. Somehow, we’re supposed to believe that Kurt was unable to tell with absolute certainty that Music of the Night was terrible –and Rachel didn’t see it either? Anvils make for lazy audiences. It was all very heavy handed (he took off the mask, showed himself, that’s how Kurt always wins) but Kurt’s audition was a victory moment — the tearaway tux was genius and those gold lamé pants, well, sheesh. Mostly? That shirt showed off why it’s ridiculous we never see Kurt in the gym with the boys. It was adorable to see Kurt sort of flail wildly at the end, because he so rarely loses his composure.

Puck’s journey from not caring, and lighting musical instruments on fire (hey, Quinn, it’s an 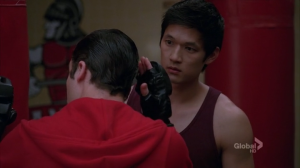 homage) to wanting to not be his dad is terrifying. Because he finishes it up by failing — and that failure is caused by either the inability to focus (like, ADHD, for instance) or self-sabotage (or hey, both). But, whatever it is, Puck’s never been lazy, like his teacher suggests, helpfully. Hey teachers: stupid and lazy are not the only possibilities.

There was an interesting cut, actually, from Puck talking about his dad and someday having to beg his daughter for money and having no dignity — and then it cut very quickly right to the kid who was only recently homeless and working as a stripper. Yup. Ouch. And Sam’s parents should always have been “safe”. He used to go to a boarding school and they moved to Lima for his dad’s job — his dad wasn’t a working class guy, but somehow, it all still fell apart. Finn wants

Puck to finish high school “just in case”, but the reminders are everywhere. Nothing in Lima is safe.

Not even marriage, or first love. Beiste’s story was heartbreaking, and real in so many crazy ways, including the way she allows it to all fade into the background. For the story to work, she had to take him back, and I will be shocked if this is not revisited very soon.

I am puzzled, frankly, by the amount of freaking out that is happening on the Internet about the Beiste storyline. Granted, I am often puzzled about a lot of things, being neuroatypical has that effect. But a few things: 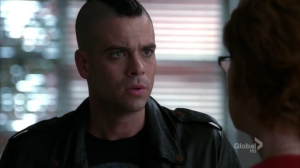