SillyGleek’s Notes on “I Kissed a Girl”

By sillygleek 30 November 2011 Glee I Kissed a Girl

While her own blog is still on hiatus, SillyGleek has been kind enough to share her thoughts on this week’s Glee episode “I Kissed a Girl”  – DG 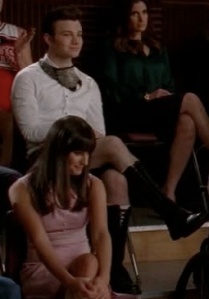 I felt as if I needed to have a little word or two (or hundred) with our dear characters after this episode.

KURT:
Dear Kurt,
Chin up. You were Campaign Manager for a CONGRESSMAN. I think that ranks higher on the “cool shit you’ve accomplished” scale than WMHS Senior Class President.
Lots of Love,
Me

P.S. And don’t forget that you led the Cheerios to a national championship which involved both singing (in French) and dancing, as well as Show Choir nationals (12th in the country ain’t bad). Plus, you have one HELL of a story to tell. You are exactly the kind of person schools all over the country are dying to have as part of their student body. Fear not, you shall be fine. Besides, I think you’re going to get into NYADA and then decide not to go.
P.P.S. You are clearly gettin’ some good action with that man of yours! I can’t tell if you were wearing the kilt or the bondage shorts during Puck’s song… it’s either a skirt with no leggings or bondage shorts. So really… HELLO!
P.P.P.S. You’re a gemini? REALLY?!?! (Yes, I realize that it was very likely one of those things that the set decorators didn’t realize that everyone would screencap IMMEDIATELY and so just gave you Chris Colfer’s birthday with a few years added on out of convenience. But fandom is ON THAT SHIT. And now it’s canon unless they Joss themselves and give you a different birthday. So yeah. Gemini? Hmm…)
Px4.S. I noticed you did not hug Brittany back and you were not comfortable with Rachel’s hug last week. It seems that Blaine is the only person you feel comfortable having touch you these days. Can we talk about that?
Px5.S. You and Blaine were absolute PERFECTION during “Perfect”. I heart you both forever and ever and ever.

BLAINE:
Oh, Blainers. You are having so much of the sex now! I saw the way you were looking at Kurt while he was singing the first verse of “Perfect” and boy howdy did I see the way you were looking at him during “Constant Craving”. I’m surprised you didn’t jump in on the song because if that look didn’t say “I’m gonna ride you so hard as soon we get home” I don’t know what does!

Also, you are completely and utterly adorable for the back rubbing during the NYADA and the huggy/cuddly thing at the end of “Perfect”. Yet these both also lead me to: You are having so much of the sex right now!

P.S. I am very happy for you and Kurt that you are having so much of the sex right now. GET IT BOYS!

SANTANA:
I feel awful that you have been forced out of the closet by a douchebag didn’t-even-win congressional candidate pizza dude. And I feel terrible that your uber-Catholic old school grandmother treated you like shit. I do. No one deserves that. But holy shit. You are an awful person. Kurt and Blaine told you that you were perfect and you added it to a list of “horrible crap” in your life? Do you feel threatened because they’ve endured all kinds of said “horrible crap” and are out and happy together? I have liked you even though you’ve been a bully and a bitch pretty solidly for 2 1/3 seasons. But I’m having a really hard time liking you these days. I get that you’re scared and I get that this is not how you would have chosen to do things. But lots of people are forced into awful situations and manage to do it without being just plain awful to other people. I would love to see you redeem yourself but I’m not sure that’s in your nature.

P.S. I’m glad your parents were ok with it even if your Abuela wasn’t. I’m glad you can still be safe in your own home.
P.P.S. Please stop being such a mean bitch?

FINN:
Finn, I honestly don’t know what to do with you anymore. I thought your “You were my first and that means something to me” moment was sweet. And I thought your intentions this episode fell into the “misguided but well-intentioned” category rather than “utter douchebaggery” like last week. But oh my god, I am getting such fucking whiplash with you, dude.

PUCK:
Dude. You win the award for “Quickest Switch Ever From Insightful to Infinitely Idiotic” this week. Because you are the first person to actually talk about what a fucking train wreck Quinn is and has been for the last two years. But then ten seconds later you went and told said train wreck a humongous secret that not a single other person on the planet but you thinks will actually keep a secret. You do know that the earliest chance she gets, she is using that information against Shelby, right?

Also, WHAT THE FUCK is up with your weird-ass mohawk this season?

QUINN:
You really kind of scare me. You’ve given up on the plan to steal back Beth (although that plan may not be as dead in the water as you thought given your new info on Shelby) so you think the solution is to MAKE ANOTHER BABY?!?! Oh honey, I have so much sadness for you that I don’t even know where to start. You are so damaged and honestly, if Glee ever decided to do a suicide plotline, I’d say you were by far the likeliest contender for that. Because you are a hot mess and have been basically forever. You need help. Yesterday.

P.S. WOWEE with that Faberry moment during “I Kissed A Girl”. A whole ship totally exploded with that move!

RACHEL:
Ok, so I get that your M.O. is that everything is about you all the time. And it always has been. I just… I can’t feel sorry for you when you don’t take into account how things will affect other people EVER. I know that this is an unpopular opinion. And I do enjoy you as a character. But I do not have all of the love for you, Ms. Berry.

Also, you really need to get a new NYADA recommendation letter. That one from Shelby Corcoran will not be worth anything in a very short time if things go the way I think they will. Your birth mother did a bad thing and then handled it VERY badly.

P.S. I loved the way you looked at Kurt and Blaine during “Perfect”. That we can agree on for sure.

MERCEDES:
Um, so I guess you and Kurt really aren’t friends anymore, are you? The fact that your entire reason for voting for him was so that you wouldn’t be voting for Santana’s girlfriend speaks so much about that friendship. I’m not saying that the demise of that BFFship is your fault. Just, DAMN. I have a lot of other thoughts about you this season, but I’m trying to keep it contained to this episode. So yeah. Later ‘Cedes.

MIKE:
I LOVE YOU FOREVER. You rocked on into that voting booth and ticked off Kurt Hummel’s name like it was not even a consideration. Also, you loaned Blaine your jacket, which makes my Bike Chanderson heart swell a size or two. You rule and I heart you.

BRITTANY:
“You’re still the most unicorn of them all.”

I love you for this line. Thank you.

RORY:
Your faces during “I Kissed A Girl” were PRICELESS.

TINA:
The only word you uttered this week was “Now.” But you gave that rugby douche an awesome stink eye. Also, your boots during “I Kissed A Girl” were badass. So yay, Tina!

ARTIE:
You sang backup on “Girls Just Wanna Have Fun” and you made some cheesy gangsta moves during “Perfect.” Beyond that, I don’t have any recollection of you in this episode.

SUGAR:
You have the best background moments ever. Please don’t ever sing again, but please continue to be in the background of every scene. Your unicorn move was AWESOMESAUCE.

SHELBY:
Look, lady. What in the hell are you thinking?! Did you actually think that Puck would keep his mouth shut when you tossed him unceremoniously out on his ass after fucking him? Yeah, not smart. Also, why the hell did you believe whatever doctor or nurse told you that you couldn’t be in the exam with your baby daughter? Because um, no. All that aside, I am enjoying the lulziness of you deciding to jump Puck after he mentioned Judo and paintball and plastic surgeons. (Ok, yeah yeah he was being all manly and demanding the best for Beth, but we all know it was about the paintball, Shelby.)

BEISTE:
Oh man. I have such a soft spot in my heart for you! I know what it feels like to think no one could possibly ever want you like that. And I know that sense of desperation once you figure out there’s maybe possibly ONE person who might consider you that way. Please, please, PLEASE believe me when I say that you are better off sticking with friends who treat you the way you deserve to be treated and not dating rather than chase after that guy. And any man who would choose Sue Sylvester over you is NOT WORTH IT. That said, Cooter did try really damn hard to get his message across for quite some time, so I can’t really be angry at him for having moved on. It sucks, but please don’t pine and make an ass out of yourself. Please?

SUE:
Your list of potential people was hilarious—Todd Bridges to Johnny Cochrane (yes, he’s dead)… CLASSIC. And bummer for you about the election but… HA HA! You didn’t even come in second! That said, hilarious line about “Dukakis bad”. Nice one.

COOTER:
I get that Beiste dropped the ball, but SUE SYLVESTER? Dude, no.

WILL:
Honestly, I don’t even have anything to say anymore, but you were in the episode.

P.S. I hear Ricky Martin might be coming to replace you as Spanish teacher. That would make me very happy.

PRINCIPAL FIGGINS:
You are the most selective-sighted person on the planet. You turn a blind eye to bribery but are ready to suspend Kurt for election tampering? Um, ok.

By the way, I don’t think you’re as evil as lots of people are making you seem with regards to the Santana slap situation. That was something witnessed by two teachers and Kurt’s bullying was never witnessed or corroborated by anyone. That doesn’t take away your World’s Worst Principal title, but in this instance, it’s not what people are saying.

BURT:
CONGRATULATIONS, Mr. Congressman! I hope this doesn’t mean that you will be spending all of your time in Washington, DC now because I like having you around. SO. MUCH. I am so excited that you won tho! Also, I think that this result will have some very significant ramifications on the future for your son and stepson. I’ll just leave it at that for now.

BRADLEY BUECKER (special non-character shout-out):
I know you’re probably tired after directing “The First Time” (which I think you did a fantastic job on, by the way), but honestly… you were totally slacking this week on your editing duties!

One thought on “SillyGleek’s Notes on “I Kissed a Girl””