Dorothy Snarker takes Glee to the shed for a spanking 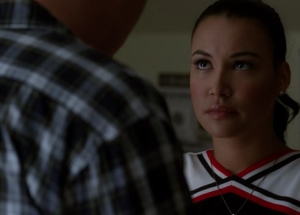 I defend “Glee” a lot. Like, a lot a lot. Like there were stretches where I felt like all I did was defend my love of “Glee.” So, in that respect, I feel I’ve built up a close-to lifetime supply of goodwill for this silly little show about a show choir in Ohio with a magical costume and backup dancer budget that makes trickle-down economics seem positively Keynesian.

So now, now I feel like burning through a little of that goodwill. If fact, I feel like setting the whole house on fire and watching the flames lap loudly against my still raging soul. Why? Well, because last night’s episode of “Glee” really fucking sucked.

It didn’t just suck because of the normal inconsequentialities and flagrant inconsistencies that can make “Glee” so frustrating for people who insist on living in a fact-based reality. I’m saying it sucked because for a show that prides itself on sending a message of tolerance and diversity, it sent a message of consequence-free outing and white-male salvation. It was severely misguided to give it the benefit of the doubt, and a few of those dreaded –ist and –istic words if you don’t.

Also, don’t get me started on the fact that the episode was called “I Kissed a Girl” and no girls actually kissed. (That cheek kiss was cute and all, but come the fuck on.)

read the rest: Dorothy Surrenders: Out, out damn Gleek.

I’m still sorting out my feelings on this, so bear with me a bit. In the meantime, girl-on-girl pop-culture guru Dorothy Snarker is pretty sure of her feelings about it, and I can’t say I can find much to counter them.

I’ve always framed Finn as the well-intentioned but clueless ally. But in an episode where Santana is disowned by her abuela and propositioned (threatened?) with corrective sex (that scene read really sinister for me, and I want to say “rape” but I hesistate.) And here Finn is again — well intentioned, but fucking clueless. And the problem with privilege and cluelessness is that other people pay for the clueless part of that equation.

And for a show that is lesbian themed in a very heavy handed way (but hey, that’s Glee), there’s a real lack of healthy feminine sexuality. Cheek kisses? Quinn wanting to make another baby? Shelby falling into bed with Puck because he’s supportive? Beiste unable to hold a guy’s hand because her first thought is that she’s being robbed? Sue looking for a hook up so that nobody will think she’s gay?

I have some issues, and it looks like I’m not alone.