The Glee Project: Tenacity (I want to be slushied) 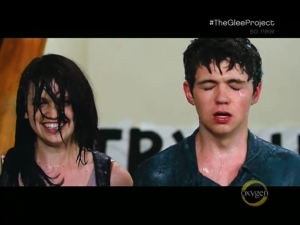 So, the excellent Max Adler was the guest mentor on this episode and he was great. They all are. Overall, the music was meh, bordering on dreadful, but the show was interesting.

I thought that Irish boy Damian really showed who he could be in Glee. He and Lindsay (who a lot of girls seem to hate) were fantastic in the video where they all got slushied. I could see the two of them quite happily as freshmen at McKinley. Lindsay, making Rachel Berry super nervous (super talented, ambitious and pretty), and Damian catching the eyes of … Karofsky maybe? Oh yes, let’s have Damian be Karofsky’s crush.

Hannah was fantastic, working through her dancing difficulties and really pushing through some kind of performance block to knock out a really great rap track.

Sam impresses me on an intellectual level. He seems like a great guy and he just knows how to get shit done. He really is the one that should have won the tenacity challenge because he just IS that. So I like him. I just don’t feel him yet.

Anyway, Marissa won the homework assignment by kicking over a chair, then grossly misused the term “tenacity”, and everyone else sees something in her that I don’t. But she lacked her normal “electricity” in the video they did, so she ended up in the bottom three for the first time.

The bottom three is always the most interesting part of the show. This is where people really bring it as they perform hoping that Ryan Murphy won’t cut them.

Alex, Cameron and Marissa were up for the cut.

Cameron makes me nuts in irrational ways I don’t totally understand. It’s partly the faux-nerd hipster thing and it’s partly the crying on the phone to mom because a girl kissed him (as directed, in a scene) and it’s partly how he just couldn’t cope with the slushies being thrown his way when everyone else did (some with more panache than others, but Cameron just couldn’t do it). He wants to be on Glee and can’t cope with slushies. It goes without saying I was hoping he’d be the one cut, but Ryan Murphy seems to like him.

Alex is someone I identify with far too much. I get that he’s annoying and I get (in very personal ways) that he’s inconsistent. But he is interesting. And whatever about the rest of the show, he absolutely blew everyone away in his last-chance performance. He did it in drag — mostly because Ryan Murphy seemed disappointed the last time that he didn’t — and sang his heart out. He was engaging and his voice was at its very best. He wasn’t going anywhere.

Cameron played one of his own songs. Ryan loved it.

And Marissa sang “Hate on Me” like she was reading her grocery list.BAM. Marissa was gone, and she probably deserved it, despite that Tumblr tantrums that resulted.

Next week the theme is sexuality. The guest mentors(!) are Mark Salling and Ashley Fink, and I think they are genius choices for it. Bring it on. I can’t wait to see what it takes to get Cameron ringing his mom this time. I’m hoping he gets paired up with Damian for something romantic, because if he can’t cope with a very chaste on-screen kiss with a girl, Christian boy is going to go up in flames if he has to be with a boy.

I’ll leave you with these brilliant predictions for next week’s epsiode from chapelofsacredminors’ tumblog (read the whole post for a totally different take on the episode).

Damian and Cameron will be paired together. They will kiss and I will .gif it forever and also cry
Alex and Lindsay get paired together and it’s a shitstorm for the ages, culminating with Alex throwing an article of clothing (preferably a sassy, brightly-colored scarf) to the ground and several shots of Lindsay pouting ~dramatically~
Hannah and Samuel will be paired together and Samuel will be smoldering like a champ and Hannah will try her best to keep up but she’s way too lovable to ever be sexy.

What will actually happen

Damian will be paired with Lindsay and they will kiss and I will scream.
Alex and Samuel will be paired together, Alex will try to work on his attitude and Samuel will just continue to be perfect, per usual.
Hannah and Cameron will be together and they will work so well together, cause they’re already friends. But she will not be able to pull herself together enough to make it out.

FINAL THREE: Alex (attitude problems. Again), Cameron (God knows something will happen that will make him feel guilty.), and Hannah (She won’t be able to stop being goofy long enough to be the sexbomb I know that she can be.)

10 thoughts on “The Glee Project: Tenacity (I want to be slushied)”