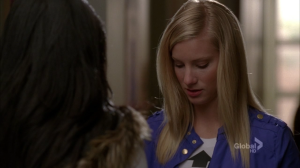 Right, now that I have that out of the way, it was Brittany who was saying it. She made a t-shirt for Santana that said “Lebanese” instead of “lesbian” so I guess I can’t be too picky about the words that come out of her mouth.

But, just ARGH. She’s not bi-curious. Bi-curious is when you want to explore the possibility that you’re attracted to the opposite sex to the one you already know you’re attracted to. She’s been making out (and scissoring, aparently) with Santana for quite a while.

So, uh, yeah, that just annoyed me. But we already know that we can’t particularly trust Brittany’s voice so it’s not really something I can really complain about… it was just… unnecessary, maybe?