SPOILERS for last night’s “Night of Neglect” episode ahead: 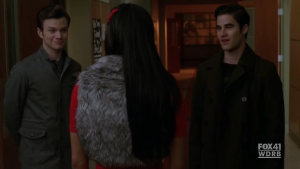 Ok, so there wasn’t very much Klaine time, and we’ll get to Sandy Ryerson and his “predatory gay” remark later. But right now, I want to focus on this beautiful scene.

Worries I’ve had about how Santana’s coming out would be handled are slowly eroding.

When she tells Brittany that she wants to be with her, that’s her second step, after admitting it to herself. We have a big — huge — step in last night’s episode too, and that’s finding community and feeling solidarity.

For a lot of us, it’s easier to stick up for others like us than it is to stick up for ourselves. Somehow, in our humanity, we find the strength to help others before we can find an excuse to help ourselves. I think it’s one of the most beautiful faults we have as a society. Of course, we mostly help people like ourselves. And here Santana shows her identification with the two out gay students, Kurt and Blaine. She, of course, is not privy to the struggles of the bully, Karofsky, but she stands with Kurt and Blaine and protects them. What she’s really doing, of course, is standing up for herself. Which is pretty awesome, actually. 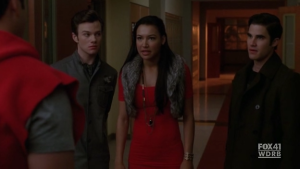 One of these things is not like the other.. oh wait, no, that is not actually true

Brad Falchuk has promised a focus on Santana’s story in the upcoming and much spoiled Prom episode. It’s looking good so far, anyway.