Editors’ Note: episode reactions at Deconstructing Glee will now be coming from a rotating panel of contributors from all around the globe. Let us know if you’d like to help, here.

The stated theme of this week’s Glee episode was “Diva,” and we got lots of amazing performances out of it and people behaving badly.  Tina finally won a contest over on the Lima side, using anger fueled by a painful and even horrifying series of events.  Meanwhile, in New York, Kurt also won his first contest, but did not act like a ‘diva’ at all.

Everyone’s been saying for the past two weeks, since Tina started staring at Blaine with hearts in her eyes, that ‘Tina is fandom.’  And now she’s embodied the worst boundary-violating behavior of fandom, but that doesn’t mean she’s not a real girl too.  So how do we even talk about the scene where Tina unbuttons Blaine’s shirt and puts the vaporub on his chest?  If it is assault, then saying it’s not is trivializing; but if it’s not, then calling it one is horribly unfair.  And if it’s a gray area, that might be easier to say, but what does it even mean?  A good intent makes actions more sympathetic, but not less horrifying.  And if some of us were horrified (I was) and some of us weren’t, is that relevant at all?  Because it seems to me that the only person whose reaction should matter here is Blaine, but he doesn’t even know what happened.  And since this topic is so fraught and emotional, how can we even go on with discussing it without tearing each other apart?

(On to happier things)

In Swan Song, Sam said that Santana had always had it in for him because he’d always liked Brittany, and the confused viewers said, what?  In this episode Santana repeats that Sam is the one person she least wants brittany to date – but why?  I’m wondering if the reason isn’t that Sam’s the last boy she dated when she was just starting to realize her own sexuality.  ‘Welcome back, trouty mouth’ in Season Three when she was securely dating Brittany may have been affectionate, but the original ‘Trouty Mouth’ song sure wasn’t.  Thoughts, anyone? 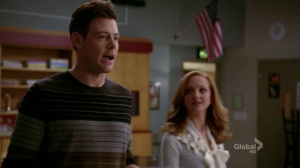 Emma is a celebrity judge in a boys-vs-girls mashup again – just like she was back in Season One – and Finn really is the new Will.  And so he responds to Emma’s panic by kissing her to shut her up, repeating a move of Will’s from Dance With Somebody (and possibly other episodes too).  So is Finn winning, because he’s a better Will than Will?  Or is he losing, because he’s stuck in McKinley after all, and Will from the beginning of the show was not an aspirational figure but a cautionary tale?  How does one balance these two questions, or are they the wrong things to be looking at entirely?

Rachel and Kurt seem to be in competition, but by the end of the episode they’re really really not.  Kurt beats Rachel in the NYADA ‘fight club’ by the smallest margin ever, because just like the original fight club, it’s about the ability to fight and not the ability to win.  (A distinction that might seem small, but is not.)  Kurt’s win isn’t about Rachel but about proving himself by winning the acclaim of his peers.  And Rachel’s loss isn’t about Kurt, either, but about not being the best in the room.  In both cases, the identity of the other competitor is immaterial.  In the end Kurt makes this explicit for Rachel (and us) by saying, effectively, you can play Elphaba, and I can play Jean Valjean; there are plenty of roles for us both.  So if being a diva is something immortal, iconic, is this the secret to it – not to beat everyone else, but to find the role that only you can play?

So – what do you think of any of these themes?  How about the numerous references to queer culture Blaine’s costumes and performances this week?  Thoughts on the evolving world that we see at NYADA?  Or anything else, from cool details to sneaky continuity and more?  Chime in with anything you might have to say below!