Discussion of the Glee Season 3, Episode 14 “On My Way” will be triggery for depression, suicide and self-harm. Maybe other stuff too. Let’s leave it at triggery. 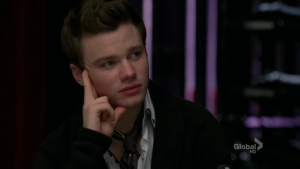 I may not be ready to write this yet, but I’m going to try. It may be a tad disjointed.

I’m not sure I don’t want Finchel to get married. I mean, it’s interesting, isn’t it? I don’t know why, but I just feel like it wouldn’t be the end of the world.

What is wrong with Blaine? I mean, I know we’ve been talking about this on Tumblr and over at Letters From Titan for a while, but seriously. Cough Syrup? As Burt Hummel once said “Fine don’t sing like you just sung.”And the screenshots of Blaine when he’s not directly involved or speaking — he just looks sad, like that’s his default. And oh, wow, Blaine. Also, what’s with Blaine narrating the show?

Karofsky. I’m a Klainer, but like many of us, I love Karofsky too. I love him because he’s the ugly part of the queer experience, and my life is all about that ugly life. In fact, at this point, my journey probably reflects Dave’s more than it does any other queer character on the show. My mother once told me I would be better off dead… about 3 years after she cried at my hospital bedside after an OD, so it’s not like she didn’t have a frame of reference. Parents are humans, and sometimes very, very, ugly humans.

I never bullied anyone for being gay, but I was anti-gay in my theology for years. Like Karofsky, the out part of my life involves a lot of dealing with people who were just like I’d been (is that redemption?). And like Karofsky, my beliefs and words affected me as much as they affected anyone. Our homophobic society acts on closeted people as much as it does on the out-and-proud. More, even, maybe. You can’t escape the words in your head, so those words need to be accepting.

The bedroom scene was exquisite. It, at times, reminded me of the Brooks suicide scene in Shawshank Redemption. At the same time, it was so different. Brooks was stoic, and at peace with his decision, leaving his mark before he left. Both men dressed in their best, trying to leave with a bit of dignity. But Karofsky cried, struggled and in no way actually wanted to die. He felt like he had to.

A few things I’ve been reading have been angry-making. Kurt holding Karofsky’s hand does not mean they are fucking, FYI. Also, Kurt feeling guilty/responsible is normal. NORMAL. We all feel that way, because we like to think we can control stuff, but also because we are broken, and not always kind, even frankly stellar human beings like Kurt. 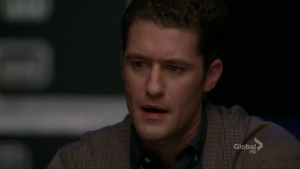 Kurt feeling guilty  and voicing it is not victim-blaming. Kurt and Dave have been hurt by the same thing: a society that sees homophobia as a good, positive thing. Dave may have acted on it and hurt Kurt, but we can see now how much he was hurting himself too.

Running out of time, so I’m going to skip Quinn and Sue for now. And Sebastian.

I wanted to talk about Will.  don’t have the same hate for Will a lot of other people seem to have. And I’m frankly disgusted by the reaction to his story about his own suicidal thoughts. There is a pretty big step between thoughts and action, but it’s a small step too. You don’t get to say whether or not their reasons for despair are valid.

It’s pretty clear that Will was a dork in school. The girl he wanted would never look his way. He was in glee. He had a lot of expectations of himself if getting caught cheating was something he really couldn’t face. I think one of the messages of Glee is that we don’t have to be perfect to be a positive force in the world. Will isn’t perfect, but he has created a safe space for a lot of people. He tried, if you’ll remember, to bring Dave Karofsky into the fold too.

Imagine if Dave had joined glee.