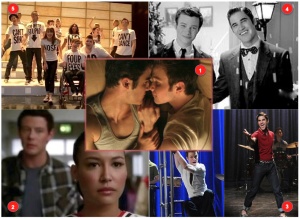 Before you start hyperventilating, Mary, here’s why these other overtly gay moments didn’t make our list.

5) “Born This Way” (Season Two): More like Bored This Way (with the exception of Karofsky’s display of label lust, of course).

4) Big Gay Xmas (Season Three): Blaine and Kurt’s arch retro-closeting was as tedious as the rest of the episode.

2) Get Out! (Season Three): Finn’s outing of Santana was both out of character and narratively out there.

1) The Big Fuck (Season Three): We know a thing or two about gay sex, and cuddling while wearing a scoop-neck wife-beater does not count as losing your virginity.

This Vanity Fair writer makes me nuts. Because sometimes he is so spot on it hurts. And other times, I wonder what fucking planet he’s living on.

For the record, I thought it was genius the way Glee discussed casting gay-as-straight and turned it into an entirely different (and far more apt) discussion about passing and gender presentation.

Your thoughts on the two lists?