Kurt and The Hanky Code 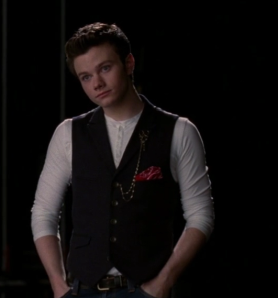 Ok, ok, I’m blinking on this one. Mostly because all the talk is happening on Tumblr and I still find it hard to follow.

How we all missed this, I have no idea, but here it is. There was a clever post on Tumblr that started off this whole discussion here.

For those of you unfamiliar with the hanky code, here’s a helpful definition from Wikipedia:

And Racheline (Letters from Titan) is asking all the right questions:

b) Kurt knows what the hanky code is and so does Blaine. But they don’t talk about it, and Blaine thinks Kurt’s a little ridiculous and over the top, but it’s more information about what goes on in Kurt’s brain about sex than he’s ever had before, so it’s not like he’s going to bring it up and risk Kurt stopping.

c) Kurt, as ever, is wearing sexualized clothing without a clue. Remember the bondage harness?

Personally, I’m of the opinion that Kurt may not know what he’s doing, but Chris Colfer, Darren Criss, Ryan Murphy and Lou Eyrich (costume designer) all do. And that means it’s hilarious. I would love to see Blaine trying to explain it to him.

44 thoughts on “Kurt and The Hanky Code”