A t-shirt and tumblr post trumps being gay and out, apparently 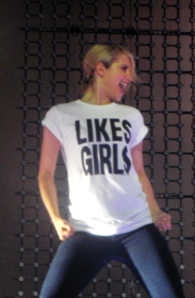 But where is Lea Michele? And where is Chris Colfer?

And while we understand that Chris wants to keep his personal life personal, we don’t think many people would think worse of him if he’d address the issue head-on. C.C. has been wishy-washy, at best, when it comes to talking about his life as a gay man and doesn’t help matters with BS answers to Q’s about gay rights issues.

The straight gals can’t be the only ones living out and proud. Take the lead, Lea and Chris, and then urge the straight studs on the show to follow suit. We wouldn’t mind seeing them swap spit to celebrate!

via Is Dianna Agron the Only Gleek Showing Her Pride? – E! Online.

This is so out of order. I mean, I’m impressed with Dianna’s tumblr post and with Naya hosting the GLAAD awards, sure. But you cannot just sit there and wonder why Chris Colfer isn’t puking rainbows for the cameras.

Being out is the single most important thing one can do for the rest of the LGBT community.That applies to you, to me and to famous people too. It’s not always possible and it’s never easy.

Chris Colfer was fairly squeezed out of the closet at the age of 19 (an age where I wouldn’t even have known I was gay), plays one of the most positive and nuanced portrayals of a gay teen on television, and did a video for the Trevor Project. And he’s only 21 years old. At the same time, he’s written a novel, sold a script to Disney, organised, cast and is about to start filming a movie he wrote, and worked as part of the hardest working tv cast out there.

Chris Colfer, an openly gay 21 year old guy, was on the Time 100 Most Influential People list. He let right wing bigots take photos with him at the White House Correspondents’ Dinner and then appeared on Piers Morgan Tonight and said exactly what he thought of them. (yes, I cheered).

Right now, gay kids have one more hero to look up to. One more openly gay, once-bullied-in-school, successful and confident person who is showing them that they can be who they are and be successful and happy too.

And, you know what? Totally enough.

5 thoughts on “A t-shirt and tumblr post trumps being gay and out, apparently”