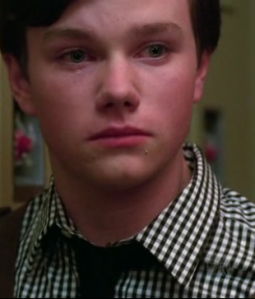 The Raisin Girl responded to my ramblings about Prom Queen by writing a Tumblr post, and I responded to it in the comments, but this has stuck with me and I thought it worthy of its own post.

Oh. The way he at Kurt and said “I can’t,” which COMPLETELY ECHOED what Kurt said to Mercedes at the beginning of season one…it was just too much. I may have cried, not just from the incredibly poignancy of the moment but because I feel that character’s pain on a very real, personal level. I understood that “I can’t” and it felt completely genuine to me.

via The Raisin Girl, Response to “Deconstructing Glee”.

So yeah, in “Acafellas”, Kurt confides for the first time in anyone, that he’s gay. And Mercedes encourages him to come out to the Glee club, but Kurt says, “I can’t”. 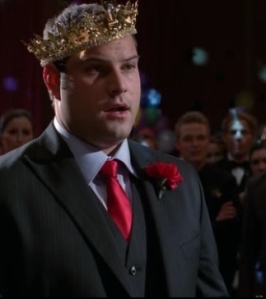 Side note: I’d forgotten how much he freaking killed that scene.

And now, we have Karofsky in the same place. Kurt’s encouraging him to come out (I love Kurt’s personal brand of insanity where he genuinely believes that’s the moment), but Karofsky isn’t ready.

I want someone more skilled with video editing than I am to splice these together.

And something I haven’t had the time to do is go back and watch and see has Santana said the same. I’m sure she has. I’m also not working tomorrow. Can’t imagine how those two things are related, but watch this space, I might have an update.

Update: As one of our commenters, Acceptable, said, Santana bowed out of Brit’s Fondue for Two idea by sending a text that said “I can’t”. Brittany’s words:

“My guest today was supposed to be Santana, but she texted about an hour ago and it just said ‘I can’t'”